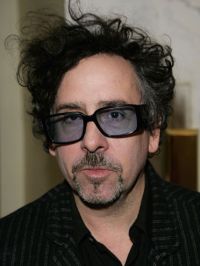 His early film career was fueled by almost unbelievable good luck, but it's his talent and originality that have kept him at the top of the Hollywood tree. Tim Burton began drawing at an early age, going on to attend the California Institute of the Arts, studying animation after being awarded a fellowship from Disney, for whom he went on to work. Although he found that the mainstream Disney films he worked on (The Fox and the Hound (1981)) were far removed from his own sensibility, Disney let him have the freedom to work on his own personal projects, the six-minute animated black-and-white Gothic Vincent Price tribute Vincent (1982), and the 27-minute live-action Frankenweenie (1984), which was judged unsuitable for children and never released. However, Paul Reubens (aka Pee-Wee Herman) saw it and decided that Burton, still only in his mid-twenties, would be the ideal person to direct his feature debut, Pee-wee's Big Adventure (1985). An enormous (and surprise) box-office hit, it led to the supernatural comedy Beetlejuice (1988), which in turn led to Burton being entrusted with the reins on the hugely expensive Batman (1989). Although his least personal film, it was one of the most successful films of all time, and gave him unprecedented power in Hollywood considering the originality and adventurousness of his work thus far. Edward Scissorhands (1990), another hit, saw him at the peak of his creative powers and established a fruitful working relationship with actor Johnny Depp. Batman Returns (1992) was a far darker and quirkier film than the original, a reflection of how much creative freedom Burton had won (though Warner Bros were reputedly unhappy with the final result). And although Ed Wood (1994), his loving tribute to the life and work of the legendary Worst Director of All Time, Edward D. Wood Jr., was a box-office disaster, it garnered some of the best reviews of Burton's career, and suggests that he'll continue dazzling audiences for many years to come.