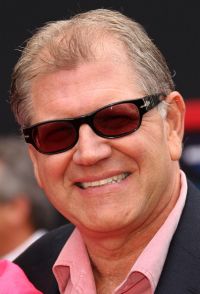 This gifted producer-writer-director is best-known for his zesty if fairly traditional Hollywood entertainments. With a flair for special effects and an impressive track record for eliciting strong performances, Zemeckis is the star graduate of the 'Spielberg School of Genre Filmmaking'. After directing and co-writing several small projects which Spielberg produced, he demonstrated that he could also helm blockbusters of his own. This billion-dollar director of nostalgic period pieces, fast-paced adventures, and eye-popping fantasies also displays a penchant for the macabre, as displayed in the popular TV series 'Tales From the Crypt' (HBO, 1989-96), which he co-executive produced and occasionally directed, and the black comedy feature 'Death Becomes Her' (1992). As a filmmaking student at USC, Zemeckis met kindred soul and future screenwriting partner Bob Gale. While many of their peers genuflected before European art films, the Two Bobs grooved to American genre fare. Zemeckis earned his stripes by netting a Student Academy Award for the 1973 film 'Field of Honor', which caught the attention of alums John Milius and Steven Spielberg, who offered the Bobs a development deal for what eventually became '1941' (1979), the poorly received WWII comedy directed by Spielberg. The year before, though, Gale and Zemeckis made their feature debut with 'I Wanna Hold Your Hand' (1978), a cheery romp about early Beatlemania, which Zemeckis also directed. But, neither their first film nor their enjoyably adolescent follow-up, 'Used Cars' (1980), stimulated much box-office action. They did, however, get the attention of Michael Douglas, who hired Zemeckis to helm the hit romantic adventure 'Romancing the Stone' (1984). With Gale producing and co-writing, Zemeckis directed the immensely popular, clever, and surprisingly poignant 'Back to the Future' (1985) and its two time-traveling sequels (1989 and 1990) for Amblin Entertainment. In between the first and second 'Future' installments, the duo created 'Go to the Head of the Class' (NBC, 1986), a darkly comic hour-long installment of Steven Spielberg's fantasy anthology series 'Amazing Stories'. This memorable outing featured Christopher Lloyd and Mary Stuart Masterson in a tale co-written by Gale and directed by Zemeckis. He and Gale also provided a surprisingly hard-boiled action script for Walter Hill's riveting 'Trespass' (1992). Without his partner, Zemeckis crafted 'Who Framed Roger Rabbit' (1988), a bravura example of integrating live action with animation and a major blockbuster for Disney and Amblin. He has also branched out into producing for network TV ('Johnny Bago', CBS 1993) and features ('The Public Eye' 1992). After the relative commercial disappointment of 'Death Becomes Her' -- a gruesome comic showcase for Meryl Streep, Goldie Hawn, Bruce Willis, and Oscar-winning FX -- Zemeckis took on an unusual project. With the sometimes fanciful and often moving comedy-drama 'Forrest Gump' (1994), the skillful toymaker proved that he could successfully tackle a large-scale story that foregrounded human elements. Adapted from the book by Winston Groom, the film has been described as essentially a picaresque novel for the screen as it covers three tumultuous decades in the life of America as seen through the innocent eyes of a child-like Southerner. Tom Hanks delivered a bravura performance in this critical and commercial hit which seamlessly integrated special effects within a realistic storyline. For his efforts Zemeckis was rewarded with the DGA award and the Academy Award for Best Director. Biding his time after such a monumental success, Zemeckis chose to wait nearly three years before helming his next project, the ponderous adaptation of Carl Sagan's 'Contact' (1997). Despite terrific special effects, that film bogged down in its addressing of big themes like spirituality and technology. The piece's pretentious tone alienated most reviewers and audiences didn't exactly embrace the movie either. There was another gap of three years, during which the director participated in the Showtime documentary series 'In the 20th Century' by probing America's reaction to its vices in 'Robert Zemeckis on Smoking, Drinking and Drugging in the 20th Century: The Pursuit of Happiness' (1999). Back on the big screen, he enjoyed the one-two punch of 'What Lies Beneath' and 'Cast Away' (both 2000) clearly demonstrated the filmmaker's strengths and weaknesses. 'What Lies Beneath' proved to be a somewhat high concept but pedestrian thriller enlivened only by the histrionics of star Michelle Pfeiffer. 'Cast Away' was far more intriguing, however. Reteaming with Hanks, the movie maker took risks with the project that eventually paid off in terms of critical kudos and a hefty box office. In presenting this story of a Federal Express employee who survives a plane crash and washes up on a deserted island, Zemeckis proved his capabilities. The expository sequences moved at a brisk pace and the airline crash was presented in harrowing detail. The bulk of the film, set on the island with only Hanks center stage easily might have devolved into maudlin claptrap. Under Zemeckis' watchful eye and through Hanks' bravura acting, though, the audience is drawn into the story. Eschewing a soundtrack or much dialogue, this section played almost like a silent film. The director overstepped in the final third when Hanks' character returns to civilization and the screenplay falters. Following 'Cast Away,' Zemeckis served primarily as a producer, shepherding such projects as 'Thir13en Ghosts' (2001), 'Ghost Ship' (2002), 'Matchstick Men' (2003) and 'Gothika' (2003). In the meantime, the director was conducting tests on his own dime to see if he could successfully adapt the popular children's book 'The Polar Express' into a CGI-animated film for the big-screen. Intrigued by the technological challenge of collaborating again with Tom Hanks, this time with the actor playing all of the roles, Zemeckis' production team experimented with a new technology called Performance Capture which would allow computers to capture the subtle nuances of an actor's performance and transfer it to the CGI character. Once he'd determined that the techology would work, Zemeckis, who also worked on the screenplay, was able to put the film into production: the result, released in 2004, was an instant holiday classic, a simple, emotional story set in a dreamlike world reflective of the source material's painted environments and populated by the most lifelike CGI humans yet seen on screen.