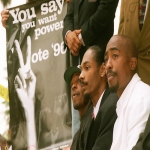 Tupac Shakur wasn't just a rapper. He was also an actor, poet and a powerful speaker who did everything with an unmatched sense of passion.

Perhaps that's why today, as we remember him on the 20th anniversary of his death at the age of 25, he still remains one of the most influential artists the world has ever known.

Shakur died on September 13, 1996, from injuries suffered in a Las Vegas drive-by shooting as he sat in the passenger seat of of a car driven by Suge Knight, the CEO of