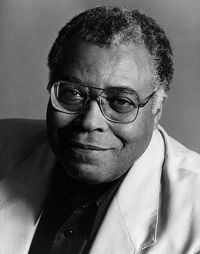 Possessing one of the most instantly recognizable voices in entertainment history, James Earl Jones is one of America's most distinguished and versatile actors. Although best-known to many people as the voice of Darth Vader in Star_Wars or as the booming 'Voice of CNN,' Jones has led a decades-old career encompassing film, television, and the stage.

Born Todd Jones on January 17, 1931, in Arkabutla, Mississippi, Jones was the son of prize-fighter-turned-actor Robert_Earl_Jones, whom he would not know for many years. At a young age, he moved to Dublin, Michigan, where he was raised on the farm of his mother's parents. Ironically enough, given that his voice would one day make him famous, Jones suffered from a severe stutter as a child, and he seldom spoke as a result. It was with the help of a high school teacher that he began to use his voice to its full potential. After entering the University of Michigan, where he went to study medicine, Jones continued to develop his voice with acting lessons. The lessons gave Jones an appetite for further theatrical experience, and he quit medicine to devote his attentions to drama study. He made his stage debut in a community theatre production in Manistee, Michigan, his last appearance for a while, as he subsequently served time in the military.

After his discharge, Jones moved to New York, where he attended the American Theatre Wing to further his training and worked as a janitor to earn a living. In 1957, he made his Broadway debut, and during the subsequent decade, he became one of the stage's most in-demand African-American actors. His best-known stage role was as a boxing champion in -The Great White Hope, which in 1969 won him the first of two Tony Awards (the second was for August Wilson's -Fences in 1987). During this time, Jones began working on television, appearing as a doctor on the daytime dramas Guiding Light and As the World Turns. In doing so, he became one of the first black actors to perform regularly on soaps. Jones also crossed over to the big screen, making his film debut as one of Slim_Pickens' flight crew in Stanley_Kubrick's Dr. Strangelove or How I Learned to Stop Worrying and Love the Bomb (1964). In 1970, he reprised his role in The_Great_White_Hope for the screen, earning Best Actor Oscar and Golden Globe nominations for his portrayal of the proud yet conflicted boxer.

Jones continued to work on the stage, screen, and television throughout the '70s, appearing in everything from documentaries about Martin_Luther_King,_Jr. to the 1974 comedy Claudine to King_Lear (1977). In 1977, a few days of uncredited voiceover work for the character of Darth Vader led to a measure of screen immortality, as part of the enormous success of Star_Wars was the iconic menace of the screen villain's voice. Jones also gave life to Vader's vocal chords for the next two films in the Star_Wars trilogy.

During the '80s and '90s, Jones continued to work steadily on the stage, screen, and television. For the latter, he found particular acclaim in 1991, winning both a Best Actor Emmy for his work in Gabriel's Fire and a Best Supporting Actor Emmy for his role in Heat_Wave. The acclaim he earned on TV was ably complemented by that he found in film, as he appeared in an impressive scope of work by diverse directors in disparate genres. In the late '80s, he could be seen doing some of the best work in his film career, first as an oppressed coal miner in John_Sayles' Matewan (1987), then as an embittered, Salinger-like author in Field of Dreams (1989). Jones spent the next decade branching out into the blockbuster action genre with his work in The Hunt for Red October (1990) and its two sequels, Patriot_Games (1992) and Clear and Present Danger (1994). He also did strong dramatic work in such films as Cry, the Beloved Country (1995) and A_Family_Thing (1996), the latter of which cast him as Robert_Duvall's estranged half-brother. Somewhat ironically, it was the actor's voice that endeared him to a new generation when he voiced the character of lion patriarch Mufasa in Disney's The_Lion_King (1994).

In addition to the entertainment industry awards he has received over the course of his career, Jones has been the recipient of a number of other honors, including The National Medal of Arts (awarded to him by President George Bush in 1992) and honorary doctorates from Yale, Princeton, and Columbia Universities. Rebecca Flint Marx, All Movie Guide