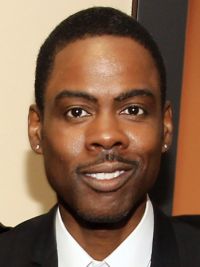 Has written a book, "Rock This," and released two comedy albums.

Was voted the funniest person in America by Entertainment Weekly.

His wife, Malaak Compton, was featured in "Redbook Magazine" as one of the winners of the 2002 Mothers & Shakers Awards. Malaak is the founder and executive director of StyleWorks, a non-profit, full-service salon that provides free services for women leaving welfare and entering the work force.

In 1993, Paramount offered him the role of Lamont Sanford in a purposed film update of "Sanford and Son" (1972). He called the idea "insane" and, because of his affection for the late Redd Foxx, lobbied to have the production halted. It was.

Hosted the The 77th Annual Academy Awards (2005) (TV) on February 27, 2005, and, despite concerns over the content of his monologue, he mostly kept it clean.

Has the rare distinction of being in two movies that opened on the same day in the U.S. - The Longest Yard (2005) and Madagascar (2005) (May 27, 2005). Both of them stayed at the two top spots at the box office the following weeks, knocking down the last installment of the Star Wars Saga, Star Wars: Episode III - Revenge of the Sith (2005). Both became members of the 100 million dollar club.

Points to Eddie Murphy as his role model and inspiration for taking up comedy and acting.

Is a fan of the TV series "Seinfeld" (1990) and has been known to make references to the show in many of his stand-up routines.

Was good friends with Chris Farley.

During his monologue at the The 77th Annual Academy Awards (2005) (TV), he quipped, "If you want Russell Crowe, and all you can get is Colin Farrell, wait!" Coincidentally, Oliver Stone pursued Crowe for the title role of Alexander (2004), yet ended up casting Farrell in the part instead. The film turned out to be one of the most critically panned movies that year.

Was considered for the role of Huggy Bear in Starsky & Hutch (2004).

Is a big Woody Allen fan.

Attended the opening of Oprah Winfrey's school in South Africa.

Began his first-ever tour of Britain in January 2008.

Formerly held the world record for having the largest audience during a live-comedy performance when he performed in front of 15.900 people in London in May 2008. The record was broken by Mario Barth in July 2008.

Has called singer Sade "the most beautiful woman in the world".

Comedian Sherrod Small is his cousin and close friend.

Both his father and grandfather were preachers.