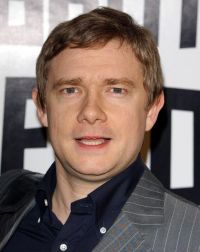 Martin John C. Freeman (born 8 September 1971) is an English actor. He is most famous for his roles as Tim Canterbury in the BBC's Golden Globe-winning comedy The Office and as Arthur Dent in the film adaptation of Douglas Adams' The Hitchhiker's Guide to the Galaxy.
Since leaving the Central School of Speech and Drama, Freeman has appeared in at least 18 TV shows, 14 theatre productions, and several radio productions. His most famous role remains that of Tim Canterbury in The Office. He also appeared in the sitcom Hardware. Additionally Freeman has appeared in several films, including Sacha Baron Cohen's Ali G Indahouse (2002) and Richard Curtis' Love Actually (2003). As well as his various comic roles, Freeman has also appeared in serious dramatic parts. His most prominent dramatic role to date has been as Lord Shaftesbury in the 2003 BBC historical drama Charles II: The Power and The Passion. He can also be seen making a brief appearance in the first episode of the second series of This Life, helping himself to £30 from Milly and Egg's bedside table before unknowingly swigging a mouthful of Egg's urine from a lager can. Freeman also starred in the BBC's television series The Robinsons. Freeman also had a cameo performance in episode 1 of 'Black Books', a Channel 4 Comedy written by Irish comedian Dylan Moran.
He had a cameo in Hot Fuzz (2007), a film written by Shaun of the Dead writers Simon Pegg and Edgar Wright, and had a brief non-speaking role in Shaun of the Dead as Yvonne's boyfriend, Declan. He is in the 2007 film The All Together written & directed by Gavin Claxton.
He also features in the video for Faith No More's cover of 'I Started a Joke'. He has recently covered a few shows on BBC 6 Music. In May 2009 he starred in a comedy, called Boy Meets Girl - a four part drama that charts the progress of characters Veronica and Danny after an accident which causes them to swap bodies.[1] Freeman will play Dr John Watson in a 60-minute BBC pilot called Sherlock, a contemporary take on the Sherlock Holmes classics. The episode, written by Steven Moffat, will shoot in January 2009.[2] He stars in the newest version (2009–present) version of the Flora advert.
Born to Geoff and Philomena R. Norris, Freeman is the youngest of five children. Originally from Aldershot in Hampshire, he now lives in Hertfordshire with his longtime girlfriend, Amanda Abbington. An actress, Abbington has appeared alongside Freeman in several productions, such as Men Only, Picking Up The Pieces, The Debt, The Robinsons and the feature film comedy The All Together. He has 2 children, a son Joe born 2005 and a daughter Grace born 2009, and is left handed.
In an edition of Who Do You Think You Are? aired on 19 August 2009, he discovered that his grandfather, Leonard Freeman was a member of the Royal Army Medical Corps during World War Two. Private L W Freeman, a Territorial Army volunteer in the 150(N) Field Ambulance Regiment, was killed in Northern France on 24 May 1940 in a Stuka dawn attack. His unit was evacuated from Dunkirk two days later. Freeman is a lifelong fan of Motown music and interviewed Smokey Robinson in an edition of The Culture Show aired in October 2009.