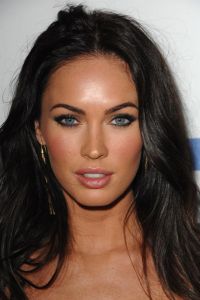 Fox was born in Oak Ridge, Tennessee,to Darlene Tonachio, former Roane County, Tennessee Tourism Director, and Franklin Foxx.Fox's father dropped an 'x' from his surname. Fox has one older sister.Fox's parents divorced when she was young and she and her sister were raised by her mother and her stepfather. Fox said that her mother and her stepfather were really strict and that she was grounded all of her childhood, not for doing anything particularly crazy, but because she didn't like being preached to by authority figures. Fox is of Irish, French and Native American ancestry and grew up in Rockwood, Tennessee. She began her training in drama and dance at age five, in Kingston, Tennessee. She attended a dance class at the community center there and was involved in Kingston Elementary School's chorus and the Kingston Clippers swim team. At 10-years-old, after moving to St. Petersburg, Florida, Fox continued her training. She attended Morningside Academy, a private Christian school, in Port St. Lucie, during her middle school years and finished her high school education at St. Lucie West Centennial High School, in Port St. Lucie, though when Fox was 17 she tested out of school via correspondence from St. Lucie West Centennial High School.

Fox said that in middle school, she ate lunch in the bathroom to avoid being bullied and picked on. She believes the problem was not her looks, but that she rubbed people the wrong way. According to her, she had always gotten along better with boys than with girls. Fox also said of high school that she was an outcast who was never popular and whose friends were always guys. 'I have a very aggressive personality, and girls didn’t like me for that. I’ve had only one great girlfriend my whole life.' She believed that school was irrelevant and because she knew that she wanted to be an actress, never took her education seriously.
Fox has been involved with actor Brian Austin Green of Beverly Hills, 90210 and Terminator: The Sarah Connor Chronicles fame since 2004, having first met on the set of Fox's show Hope & Faith. It was reported that the couple had ended their relationship in July 2008 and in February 2009; however, Fox and Green both confirmed on both occasions that the two are still in a relationship. On June 15, 2009 at the UK premiere of Transformers: Revenge of the Fallen, Fox stated, 'I'm what you would call single'. However, Fox was later seen with Green and the media is reporting that the two are in a relationship again.

Fox is good friends with Jennifer Blanc, Kellan Rhude, Jennifer's Body co-star Amanda Seyfried, Michael Biehn and Transformers co-star Shia LaBeouf.Fox is both a fan of comic books, anime, and video games. She has said that her interest in art began when she was 12 years-old when she watched animated shows on Adult Swim on Cartoon Network. Fox's favorite artist is Michael Turner, Fox's favorite comic book by Turner is Fathom, which she describes as 'one of her longtime obsessions'.Fox has two dogs, including a Pomeranian named after the punk-icon Sid Vicious.

Fox has openly stated that she's taken drugs but '...that's how [she] knows [she doesn't] like them.' Fox also said that 'Cocaine is back with a vengeance ... Celebrities aren't trying to hide it, except when people have camera phones,' and commenting that 'I know about five people who aren't on drugs today, and I'm one of them.' Fox has also openly stated that she supports the legalization of marijuana, saying 'I don't even think of it as a drug -- it should be legalized,' and continuing with 'When they do, I'll be the first person in line to buy my pack of joints,' and 'I can't tell you how much bullshit I've been through because I will openly say that I smoke weed. People look at it like it's this crazy, hippy, fucked-up thing to do. And it's not. I hope they legalize it.' Fox is also Catholic.

In an interview with GQ Magazine, Fox claimed that when she was 18 years-old that she fell in love and sought to establish a relationship with a female stripper. Fox used the experience to illustrate her belief that, 'all humans are born with the ability to be attracted to both sexes.' In May, 2009 Fox confirmed her bisexuality.'

On June 15, 2009, at the UK premiere of Transformers: Revenge of the Fallen, Fox said that she has a 'crush' on Cheryl Cole and that she loves 'her tattoos'. Fox stated in June, 2009 that she is interested in Korean pop singer Rain. Fox said when she was on The Kyle and Jackie O Show that 'There's this Korean Justin Timberlake named Rain. And I'm really on this situation right now, I'm trying to fix this up.' In an interview with GQ magazine Fox showed interest in Olivia Wilde saying, 'I could see myself in a relationship with a girl - Olivia Wilde is so sexy she makes me want to strangle a mountain ox with my bare hands. She's mesmerizing.'