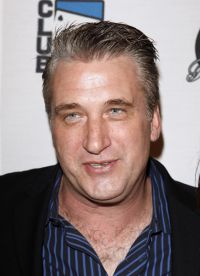 Admitted to hospital in "critical condition" after he was found in his hotel room suffering from a suspected drugs overdose. [2 February 1998]

About Daniel Baldwin's daughters. He has a daughter Kahlea (born in 1985), with first wife, Cheryl. Kahlea lives in the U.S. He has a second daughter, Alexandria (born in 1994), with second wife, actress Elizabeth Baldwin. Elizabeth lives in London, England, UK.

Son, Atticus, was named after a character in Daniel's favorite movie To Kill a Mockingbird (1962)

Is the only one of the four Baldwin brothers to not receive a Razzie nomination.

Refused to appear on "Saturday Night Live" (1975) with his brothers for a "Family Feud" sketch. He was replaced by Tim Meadows, who was "the cousin".

An Estonian lifestyle magazine, "Heat", has a monthly movie column dedicated to him, entitled "Who is Daniel Baldwin?" which discusses and satirizes Hollywood's somewhat mediocre and B-list actors.

First marriage was to his high school sweetheart Cheryl, with whom he had his daughter Kahlea. He and second wife Elizabeth had a daughter, Alexandra (who lives in London). Both daughters are estranged from Daniel. He has recently improved his relationship with his son, Atticus.

Had a very public relapse in 2005 on VH1's "Celebrity Fit Club" (2005), on which he erupted during filming. Daniel admitted to becoming addicted to pain medication and eventually left the show.

Shortly after landing his first solid acting job at the age of 29 on the sitcom "Sydney" (1990) in 1989, Daniel claimed he began using cocaine.

Daniel's father, Alexander Rae II, was a high school history teacher and head football coach at Massapequa High School. He died of lung cancer in 1983 at the age of 55.

Daniel describes his acting brothers as Alec being the big star, Stephen the born-again Christian, Billy the popular one with the girls, and he being the troublemaker.

Starting in December of 2006, Daniel allowed "Primetime" to follow his progress through drug rehabilitation, in order to shine a light on the mind of an addict and to share the personal issues that landed the 46-year-old into rehab for the ninth time.

He was the third child in a large Irish Catholic family. Beth was the oldest, then Alec and Daniel. Three years later, Billy was born, followed by Jane and, finally, Stephen.

Daniel and his new wife, Joanne Smith-Baldwin, became the parents of a girl, Avis Ann, on January 17, 2008 in Los Angeles. Avis Ann weighted in at 7 lbs. 10 oz. Daniel and Joanne met at a rehab facility where he was a patient and she worked as a chef at the treatment center.

He and his wife, Joanne Smith-Baldwin, are parents of a girl, named Finley Rae Martineau, born August 7, 2009 in Los Angeles.

Daniel stated in an interview that he grew up, and was friends, with the DeFeo children. The entire DeFeo family was murdered November 13, 1974 by the oldest son, Ronald DeFeo, inspiring the movie Amityville Horror.