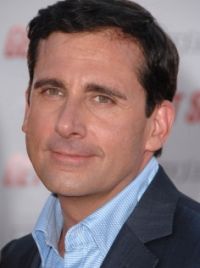 As a correspondent on the popular news show parody “The Daily Show” (Comedy Central, 1999- ), actor Steve Carell has used his strange and often surreal deadpan humor to build a career that eventually spanned into high profile movies and television shows, including his star-making turn in the sleeper hit comedy, 'The 40-Year-Old Virgin' and his turn as the pushy but clueless boss, Michael Scott, on the American adaptation of the British hit comedy series, 'The Office' (NBC, 2005- ).

Born Aug. 16, 1963 in Concord, MA, he attended Dennison College where he formed a touring company that went traveled the country improvising and doing sketches. After graduating in ’84, he moved to Chicago the following year where he became a member of the famed Second City improv theatre for over 10 years. It was during his stint at Second City that proved to be fortuitous for Carell—he met future wife, actress Nancy Walls, and future “Daily Show” cohort Stephen Colbert. Though the foundation for his career was being set, it would take years and a lot of hard work for him to make a name for himself.

After gaining more experience in Chicago at the Goodman and Wisdom Bridge Theaters, Carell made his film debut in “Curly Sue” (1991), a family comedy about a precocious nine year-old girl (Alisan Porter) and a street-smart drifter (Jim Belushi) who try to scam their way into the good graces of a wealthy attorney (Kelly Lynch). He next appeared on “The Dana Carvey Show” (ABC, 1996), a sketch comedy show doomed in its first episode after a skit showing President Bill Clinton breastfeeding puppies. The show lasted a month. Carell then found himself on another short-lived series, “Over the Top” (ABC, 1997), playing Yorgo Galfanikos, an annoying Greek chef. Starring Tim Curry as a newly-unemployed star of stage and screen, and Annie Potts as the women he was married to for seven days, the show lasted a solid three weeks before being suddenly pulled off the air, never to be seen again.

Carell landed a couple of guest starring roles on “Just Shoot Me” (NBC, 1996-2003) and “Strangers With Candy” (Comedy Central, 1998-2001) before joining “The Daily Show” during its fourth season—thanks, in part, to fellow Second City alum, Stephen Colbert. Carell became one of several “correspondents” doing mock field pieces, while sometimes appearing in studio to serve as an expert in whatever particular field the show needed for that episode. Though considered a comedy show—or fake news program, as dubbed by host John Stewart—“The Daily Show” was often credited by critics and fans for being more truthful than mainstream news. Aside from his correspondent pieces, Carell had regular segments that covered other topics apart from news and politics: Slimming Down with Steve; Ad Nauseum, which lampooned advertisers and their products; and Even Stev/phen, where he went one-on-one with Colbert in ridiculous and unproductive arguments on issues of the day.

Though Carell remained an infrequent contributor to “The Daily Show”, by 2004 he had moved on to greener pastures. He nearly stole the show from Jim Carrey—a rare, if not impossible feat—as a tongue-tied newscaster in “Bruce Almighty” (2003). He then had two feature films released in the same week in summer 2004: “Anchorman,” in which he played a bizarrely off-kilter weatherman, and “Sleepover”, where he played an overeager security guard. Carell’s star continued to rise as he signed on to appear in several high profile projects: he was tapped to play Uncle Arthur in the adaptation of the popular 60’s television show, “Bewitched” (2005), giving an exquisitely Paul Lynde-esque performance; he had a minor role in Woody Allen’s return to form, “Melinda and Melinda” (2005); and he was set to play Maxwell Smart in the film rendition of the 60’s spy comedy show, “Get Smart.”

By this time, Carell was clearly established as a central figure in what many characterized as a comedic Rat Pack-style clique of actors who frequently teamed up and/or cameoed in each other's films—the group also included Ben Stiller, Will Ferrell, the Wilson brothers Owen and Luke and Vince Vaughn. Undoubtedly, the biggest shoes he had to fill were those of Ricky Gervais when Carell signed on to be the conniving office manager in “The Office” (NBC, 2005- ), the Americanized version of the wildly popular BBC series that depicted the goings-on of a merchant paper company. Though not a ratings smash in its first season, the series was well-reviewed, appealed to a devoted core audience and performed strongly enough to be renewed for the fall. Meanwhile, Carell was honored with a Golden Globe award for Best Performance by an Actor in a Television Series – Musical or Comedy.

Over the subsequent summer, Carell received rave reviews for his first starring role in a feature film, playing the titular character in the R-rated comedy 'The 40 Year-Old Virgin' (2005). As the sexually inexperienced electronics store technician Andy Stitzer, Carell (who also had a hand in improving much of the film's scenes and dialogue, managed to pull off the very difficult task of bringing his oft-cartoonish comedic gifts into play while still developing the character as both a somewhat realistic and always sympathetic protagonist, involving the audience in the story while keeping them laughing. After voicing Hammy the Raccoon in Dreamworks’ amusing animated feature, “Over the Hedge” (2006), Carell took a quasi-serious turn as a gay, suicidal Proust scholar struggling to deal with a spurned love affair in “Little Miss Sunshine” (2006), a dark comedy with a heart that focused on a dysfunctional family and their quest to drive their youngest daughter 800-miles to a beauty pageant. In a strange turn only Hollywood could manage, Carell revived his character from “Bruce Almighty” to star in “Evan Almighty” (2007), turning his once-supporting role into a lead after Jim Carrey opted out of the sequel. This time around, God asks Evan to build an ark in order to save the world from a second flood.