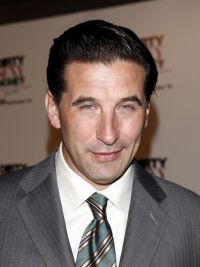 Before becoming an actor, he worked as a male model.

Rode along with the Chicago Fire Dept.'s Squad 5 in preparation for his role in Backdraft (1991).

His son Vance was born on the same day and month (October 23rd) as his niece, Ireland.

Wanted to name one of his sons Gehrig after New York Yankees legend Lou Gehrig.

No relation to actor Adam Baldwin.

Four years after they got together, William and Chynna were married on September 9th, 1995 at the Sacred Hearts of Jesus and Mary Roman Catholic Church in South Hampton, New York.

The Creative Coalition ( TCC ) elected William its their new president.

William likes jazz, the Count Basie Band (swing), and Van Morrison, but has no favorite genre of music.

William and his older brother Alec were both very close friends of the late John F. Kennedy Jr.

Like his brother Alec, William is a vegetarian and was once nominated for PETA's "Sexiest Vegetarian".

Both he and his brother Alec Baldwin won $250,000 for charity on separate celebrity episodes of Who Wants to be a Millionaire.