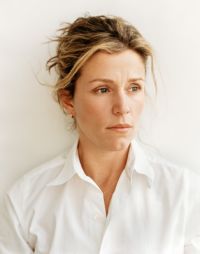 Has one son, Pedro McDormand Coen, adopted from Paraguay in 1994

Was the third and youngest child adopted by her minister father Vernon and his wife, Noreen.

Both of her parents were born in Canada. Her father, Vernon McDormand, was a Disciples of Christ minister and her mother, Noreen McDormand, a housewife.

Her Oscar-winning role, as Marge Gunderson from her film Fargo (1996), was ranked #33 in the American Film Institute's Heroes list in their 100 years of The Greatest Screen Heroes and Villains.

Was nominated for Broadway's 1988 Tony Award as Best Actress (Play) for a revival of Tennessee Williams' "A Streetcar Named Desire."

Her performance as Marge Gunderson in Fargo (1996) is ranked #27 on Premiere Magazine's 100 Greatest Movie Characters of All Time.

As of 2007, six women have received Best Actress nominations for performances directed by their spouse - Frances is the only one to actually win. The other five are Gena Rowlands for A Woman Under the Influence (1974) & Gloria (1980), Joanne Woodward for Rachel, Rachel (1968), Julie Andrews for Victor Victoria (1982), Elisabeth Bergner for Escape Me Never (1935) and Jean Simmons for The Happy Ending (1969). Jules Dassin also directed his future wife Melina Mercouri in an Oscar-nominated performance (Never on Sunday (1960)), but they weren't married yet at the time of the nomination.

Shared an apartment in the Bronx with Holly Hunter in the early 1980s until they moved in with Joel Coen, Ethan Coen and Sam Raimi into a house in Los Angeles.