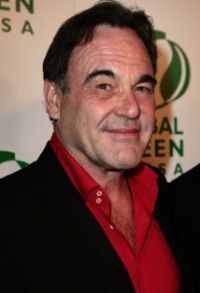 Since the mid-1970s, Stone has evolved from a respected screenwriter of major features and director of modest genre fare to become one of the most honored, best known and most controversial filmmakers working in modern Hollywood. Impressively, Stone has made his name and fortune from 'difficult' political subjects—the Vietnam War, the Kennedy assassination, US involvement in El Salvador—which, in other hands, generally fail to ignite the box office. Stone is also a successful producer, overseeing such diverse projects as Barbet Schroeder's 'Reversal of Fortune', Kathryn Bigelow's 'Blue Steel (both 1990) and Wayne Wang's 'The Joy Luck Club' (1993). He also executive produced 'Wild Palms' (ABC, 1993), a popular, paranoid sci-fi miniseries.

Stone first gained acclaim as a writer, winning an Oscar, a Writers Guild Award and a Golden Globe for his screenplay for 'Midnight Express' (1978). Prior to that, at age 25, he wrote, directed and edited 'Seizure' (1974), a stylish, low-budget (0,000) Canadian horror film starring Jonathan Frid (of 'Dark Shadows' fame). An intriguing cast failed to compensate for the incoherence of the screenplay about a novelist, his family and friends, who are bedeviled by what may be the writer's nightmares given flesh; the film has nonetheless acquired a small cult following. Stone returned to horror for his next directing assignment--'The Hand' (1981), a retread of 'The Beast with Five Fingers' (1946), starring Michael Caine as a cartoonist who loses his hand in an accident. His life becomes further complicated when his missing member goes on a murder spree. Stone's screenwriting jobs were somewhat more respectable genre films, including 'Conan the Barbarian' (1982), co-written with director John Milius; Brian De Palma's 'Scarface' (1983); and 'Year of the Dragon' (1985), co-written with director Michael Cimino. While these films have their admirers, each to varying degrees reflects criticisms that would plague much of Stone's work as a director--charges of racism (particularly towards Asians), excessive violence and the marginalization of female characters.

With the release of 'Salvador' (1986), Stone was off and running to achieve his current status as one of Hollywood's most forceful directors, tackling social and political themes with evident skill and commitment, as well as generous doses of bombast. His films were often heavy-handed, a bit simplistic, and overly-masculine, but they moved people with their big emotions and powerhouse imagery. Stone received a second Oscar and a Directors Guild Award for 'Platoon' (1986), one of the starkest treatments of the Vietnam war to reach American screens, and brought a similarly uncompromising gaze to bear on the world of high finance in 'Wall Street' (1987), the street where his own father plied his trade as a stockbroker. 'Born on the Fourth of July' (1989), meanwhile, based on the true story of Vietnam veteran Ron Kovic and featuring Tom Cruise in his first 'heavyweight' dramatic role, earned Stone a second DGA Award and Oscar for directorial achievement. The film depicted Kovic's evolution from naive gung-ho kid to frightened soldier to embittered paraplegic to committed anti-war activist.

Stone's most ambitious and controversial work was 'JFK' (1991), a dramatization of the attempts by New Orleans D.A. Jim Garrison (Kevin Costner) to uncover a conspiracy behind the assassination of President John F. Kennedy. A substantial artistic achievement which weaves volumes of theories and hypotheses into a narrative peppered with colorful cameo performances, the film led to Congress' opening of the classified files relating to the shooting, as well as providing armies of conspiracy theorists with ammunition for their views. Stone reached a new level of notoriety with the release of 'JFK'; no longer just a filmmaker, he was a political figure. As such, Stone was variously attacked and applauded by politicians, editorial writers and newspaper columnists across the country.

Stone returned to Vietnam for 'Heaven and Earth' (1993), but this story was told from an Asian female perspective. Based on two autobiographical books by Le Ly Hayslip, 'When Heaven and Earth Changed Places' and 'Child of War, Woman of Peace', this was the continent-spanning story of how the war impacted upon the life of one young woman in Vietnam and back in the States with her American husband. Some saw the film as an atonement for the narrow 'American male' point of view expressed in the first two installments of Stone's unplanned Vietnam trilogy. In any event, the film was greeted by mixed reviews and lukewarm box office.

Stone returned to politics and history with his massive, controversial, near Shakespearean study of the 37th President of the United States, 'Nixon' (1995). Clocking in at over three hours, filled with visual gimmicks (flashbacks, black and white footage, varying film stock) and layered in pop psychology, 'Nixon' (played by Anthony Hopkins) attempts to capture the essence of the man, but fails to truly humanize him. Nonetheless, there were critics who hailed 'Nixon' as a masterpiece and most reviewers agreed that Stone elicited strong performances from the ensemble (including Joan Allen as Pat Nixon, James Woods as H.R. Haldeman, and E.G. Marshall as John Mitchell).

Next, after producing the acclaimed HBO telepic 'Indictment: The McMartin Trial' (1995), the Oscar-nominated Milos Forman film 'The People vs. Larry Flynt' (1996), the cult favorite 'Freeway' (1996) starring Reese Witherspoon, as well as receiving part of the screenplay credit for the film adaptation of 'Evita' (1996), which he almost helmed, Stone directed the crime drama 'U-Turn' from the John Ridgeway novel, a nightmarish (but also deftly comic) study of a drifter (Sean Penn) who automotive breakdown in a noir-ish Southwestern small town becomes stranger by the minute when he becomes involved with the wife (Jennifer Lopez) of a local man (Nick Nolte), each of whom hires Penn to kill the other. One of Stone's more unusual films and lacking the usual controversy that accompanied his efforts, 'U-Turn' also proved to be one of his most accomplished. Then, after busying himself by producing the films 'Cold Around the Heart' (1997), 'Savior' (1998) 'The Corruptor' (1999) and the documentary 'The Last Days of Kennedy and King' (1998), the director turned his longtime love of professional football into the visually stunning, if somewhat story-impaired, film 'Any Given Sunday' (1999), using an arresting, fast-paced MTV-style of shooting and editing to portray the gridiron competitions as modern-day gladiator competitions. Still, while the film was cinematically spectacular and Stone got intense dramatic performances out of Al Pacino and Jamie Foxx, the film's storylines paled in comparison to the movie's exciting visual panache.

Next, Stone the executive producer delivered the critically praised Showtime telepic 'The Day Reagan Was Shot' (2001), based on the attempted assassination of President Ronald Reagan, while Stone the director turned to documentaries, helming 'Comandante' (2003), a film assembled from footage of the director visit with Cuban dictator Fidel Castro which aired on HBO. After five years without a theatrical offering, Stone returned to the big screen with his first epic production, 'Alexander' (2004), chronicling the history of the Macedonian conqueror Alexander the Great (Colin Farrell). Lavish in style, confusing in tone and possessing an overwrought and overlong story, “Alexander” floundered mightily at the box office, taking in less than million. Stone took it from all sides, countering criticism and often vicious scorn with a sharp anger not usually displayed from the thoughtful director. Never before had Stone failed so miserably. But he bounced back—critically at least—with his next project, a sober and heart-wrenching take on the September 11th terrorist attacks, “World Trade Center” (2006), starring Nicolas Cage as Port Authority sergeant John McLoughlin who, along with Officer Will Jimeno (Michael Pena), survived for 24 hours underneath the rubble after the towers collapsed. A true story of courage and survival amidst an act of pure evil, “World Trade Center” found Stone unlikely allies with the conservative scourges who typically blasted his movies—notably “JFK” and “Born on the Fourth of July”—because of their conspiratorial bent and political stance. Stone was careful not to delve into politics with “World Trade Center,” not out of self-censorship, but because he wanted to tell the personal stories of the two Port Authority officers who survived a devastating day with hope intact.